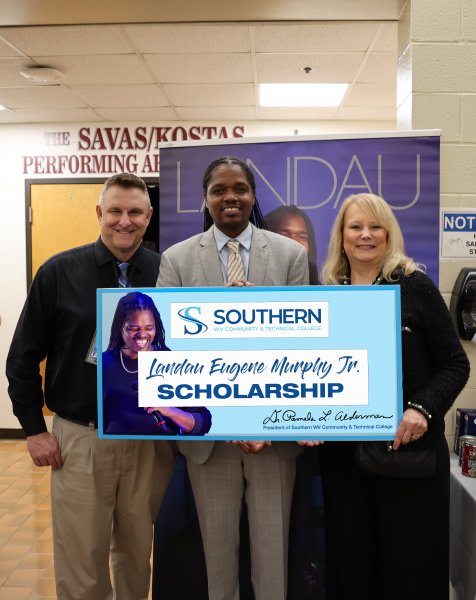 Southern President Dr. Pamela L. Alderman joined Landau onstage during his performance. “We have a special surprise for you (Landau) and everyone else,” Alderman said. “Southern is now offering a scholarship in your name for non-traditional students.”

Murphy used his downtime during the pandemic to earn his GED, three decades after he dropped out of high school. “It’s never too late to achieve your goals,” Murphy said. “I am honored that the college decided to offer this scholarship to students who decided to come back to college later in life.”

The scholarship is for any non-traditional student in need of financial assistance who is enrolled in a degree-seeking program at Southern West Virginia Community and Technical College.

Priority consideration will be given to non-traditional students. Attach to the application an essay, 300 to 500 words, explaining how a college education will assist you in achieving your goals.

Alderman said she is proud to be partnering with Landau. “He has been such a great ambassador for education and our community. We couldn’t happier to make this scholarship in his name available to our students.”

Following last night’s performance, Landau greeted friends and neighbors in the front hallway with hugs and handshakes. “This is my favorite part of the night,” he said. “There’s nothing like a hometown crowd. They see me up on stage tonight. Tomorrow they will see me in Walmart. I love being from Logan, West Virginia and I’m still proud to call it home.”