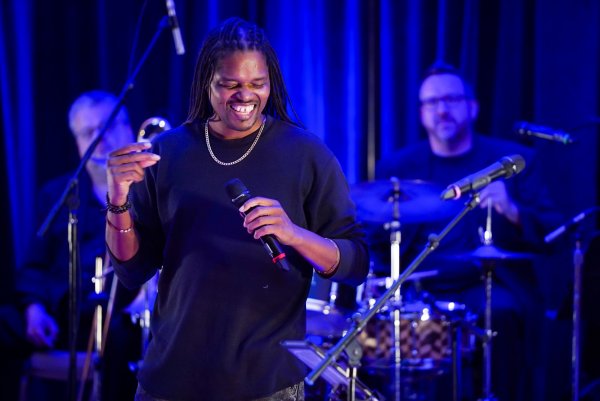 Landau will be celebrating the 10th Anniversary of his “America’s Got Talent” win as part of Southern West Virginia Community and Technical College’s 50th Anniversary celebration with a free concert on Saturday, October 16th. Tickets will be available starting Monday, September 27th. Each ticket requires a donation of two cans of food to benefit the college’s food pantry which serves its students.

Southern is proud to present Landau as he celebrates the 10th Anniversary of his “America’s Got Talent” win. The concert will be held in the Savas Kostas Performing Arts Center starting at 7pm. Southern is asking for at least two cans of food for each ticket to be donated to the local college’s food bank, which serves its students.

Tickets become available on Monday, September 27th beginning at 9am. Limit two tickets per person. Tickets can be picked up at the receptionist desk in the front hallway of Building A on the Logan campus. Food donations need to be made at the time tickets are picked up. We have limited seating, secure your ticket in advance. The seats will be held until 6:45pm on the day of the concert. This is a general admission event. No reserved seating. First-come, first-serve.

Landau’s win in 2011 brought national and international attention to our local community. Celebrations and parades were held, banners and posters were in business windows and a bridge was named after him.

In 2011, he got his big break when he won “America’s Got Talent”, receiving a million-dollar grand prize, a Las Vegas show, and a recording contract with Columbia Records. Landau’s debut CD shot to number one and stayed there for six weeks.

Murphy spent some 200 days on the road each year doing shows, but all that came grinding to a halt with the pandemic.

The coronavirus pandemic may have halted the “America’s Got Talent” winner to stop touring, but he put the time to good use. Murphey obtained his high school equivalency diploma.

Murphy, who dropped out of school three decades ago in the 11th grade, went back to school online this spring and summer to earn the diploma, according to a news release from his promoters.

“My manager and a few close friends kind of teamed up and encouraged me to make this downtime count for something, and I am so glad I did,” Murphy said.

The decision to drop out of school all those years ago could haunt him for years, causing him to drift between low-wage jobs without any chance to advance, the news release said. At one point, he was homeless and living in his car.

Supporters encouraged him to make the most of his break, so he decided to pursue the high school equivalency diploma. After spending about a month studying, he passed the first four class modules in pretty quick order, and finally aced the advanced math on the third try.

“I wasn’t going to give up. I’d waited way too long and come too far. I wanted this diploma as much as I wanted to turn my life around by going on AGT. Maybe more,” Murphy said.

Murphey will be performing every song from his run of wins on “America’s Got Talent” run. He will also be throwing in some surprises.

Southern President Dr. Pamela L. Alderman said “We are thrilled to present Landau on our stage. He has been an ambassador for the local area and a strong advocate for education. We are more than excited that he will be part of our 50th Anniversary year-long celebration.”

The concert is being sponsored by Fountain Place Cinemas, Logan Regional Medical Center, and The City of Logan.